Today sees the publication of Etopia Press author Jasen Quick’s novel, The Significant Deaths of Cage and Constance. I asked Jasen over and shone my floodlight in his face:

Steve: What is your earliest memory?

Jasen: Waving at the dustmen as they drove down our street – then one of them put a scary mask on and scared me so much I ran home.

Steve: When did you first have the urge to write?

Jasen: In 1979 (aged 8) I had a poster book of the film ‘The Black Hole’. I re-wrote the story on paper and cellotaped it together to make a paperback. After that I started to write short stories.

Steve: You once wrote a feature for The Times. What was that about and how did you land that catch?

Jasen: From being in the wrong place, at the right time, with the right story. My second son died as a baby and I wrote personal article about the three days he was alive. The paediatrician at the hospital said that she had been trying to get the hospital to change their policy on ultrasound scanning so I asked whether publishing my account of my son’s short life would help. She thought it would, so I rewrote it for the public to read and submitted it to The Times. They didn’t hesitate in publishing it as a full feature. Apparently, the paediatrician showed the newspaper to the hospital’s board and they immediately changed their policy on ultrasound scanning.

Steve: I’ve only read the blurb for The Significant Deaths of Cage and Constance and I am dying to read the book. The cover is amazing, by the way. Without giving too much away, can you tell us something about the story?

Jasen: Cage Reynolds suffers from depression, lives alone and finds life somewhat boring. Then he meets someone who changes his life in a way that he could never have imagined. It’s hard to say more without giving away too much. He has a history like no one else alive and it catches up with him. 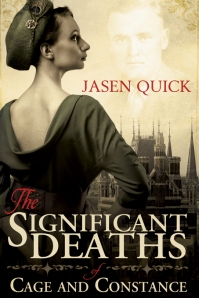 Steve: Your book’s trailer is captivating. Did you do that yourself or did you hire someone?

Jasen: I did it myself using paintshop pro and windows movie maker. I took most of the photos (and video) myself and downloaded some royalty-free music.

Steve: If you had to write a story in a different genre, what would it be?

Jasen: I’m not really sure what my genre is! The Significant Deaths of Cage and Constance is a historical, sci-fi, thriller, paranormal-ish romance. I’ve never written straight horror. I might try that under a psuedonym.

Steve: Do you ever suffer from writer’s block?

Jasen: Yes. Can’t think what else to say about that.

Steve: What do you read for your own pleasure?

Jasen: Mostly thrillers. Dean Koontz, Jeff Lindsay, Thomas Harris, Michael Robotham. I really like Jack Finney because time-travel is a favourite subject of mine. I am currently reading “In the Shadow of Gotham” by Stephanie Pintoff. I’m half way through and recommend it.

Steve: We are hearing more and more about e-publishing. What’s your view on it and how do you see the future for the industry?

Jasen: I tend to be open-minded about things. I think there will be eighteen months of the media telling us how books are going through the same problems that music went through (and still is) and then things will settle and find their own balance. I still buy CDs and I will always buy printed books. I’m hoping my lovely wife will buy me a Kindle so I can fill it with e-books. Those which become favourite reads will find themselves on my bookshelf in hardback form as well. I think bookshops will find it difficult to stay relevant and they will need to offer a service beyond simply selling printed books. Maybe they should start selling e-readers and offer a facility for customers to buy e-books and download them to their e-readers. They could also do what cinemas did – start selling popcorn at £7 a tub. They have to make a profit on something.

Steve: Which single person has most influenced you?

Jasen: With writing, I would say Dean Koontz. Whatever people think about his books, I have always found them fun and enjoyable to read. He is clearly doing something right because he is consistently in the best sellers lists. People are quick to criticise writers like DK but I think there is a place for fun books and serious literary books alike. For general influence, I would say my grandad. He had a real presence about him and I grew up thinking he was the wisest member of our family. I hope people think that of me when I’m a grandparent.

Steve: In the film of your life, who would you want to play you?

Jasen: When I was in my early twenties people used to say that I looked like Kiefer Sutherland. Obviously if you look at my photo now there’s no similarity at all but I would be happy for Kiefer to play me in the film of my life.

Jasen: As that weird guy who wrote stories which made people think about the world around them and showed people that you don’t have to copy everyone else and fill your life with what you’ve been told you should fill it with.

The Significant Deaths of Cage and Constance is available from Amazon.co.uk and Amazon.com

1 thought on “Maybe Not Kiefer Sutherland, But Still Significant”