I’ve enjoyed Catherine Cavendish’s previous works and was eager to read her latest offering. The cover is stunning, but would the book live up to it? 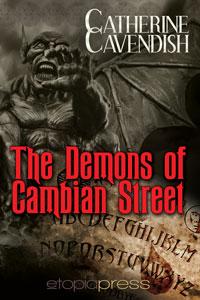 Sometimes evil wears a beautiful face…
After her illness, the quiet backwater of Priory St Michael seemed the ideal place for Stella to recuperate. But in the peaceful little town, something evil is slumbering, waiting for its chance to possess what it desires. When Stella and her husband move into the long-empty apartment, they’re unaware of what exists in the cupboard upstairs, the entrance to an evil that will threaten both their lives…

I sometimes think as a horror writer and someone who has also watched hundreds of horror films, that maybe one becomes desensitised, unable to feel fear from a work of fiction. I’m often entertained by what I’m happy to rate as good horror, and often I’m totally disappointed. I didn’t expect to be disappointed by The Demons of Cambian Street, having already a taste for Cavendish’s genre, but a haunted flat could have been a bit, well, flat I suppose.

Cavendish is distinctively British – it comes out clearly in her style and content, and it’s one of the things I like about her writing (it is a shame, in my opinion, that for the US market her language gets tweaked, but don’t let me make this out to be a bigger issue than it is. I just found an incongruous ‘gotten’ that leapt right out and scared the shit out of me, and I felt that in a British town, a British car might have been allowed a boot rather than something more associated here with a popular pachyderm). Her stories are of the old school such as M R James and, dare I say, Wheatley (the real one, not the current impostor!). With The Demons of Cambian Street she grows in stature to take her place in that Hall of Fame. To my surprise, this story chilled me, sending a rash of goosebumps up my arms, shrinking my scalp and releasing that cold bicycle down my spine. I’d almost forgotten how that felt.

3 thoughts on “The Demons of Cambian Street : Review”