Today I’m stepping back and leaving you in the capable hands of my fellow author, Catherine Cavendish. Take it away, Cat… 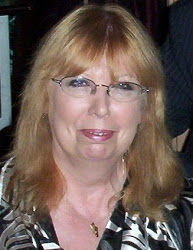 My latest Paranormal Horror novella, Miss Abigail’s Room is set in 1896 in a large, grand (well it used to be anyway) country house in rural Wiltshire and much of the story concerns the servants who worked below stairs.

TV series such as Downton Abbey and the original Upstairs, Downstairs have painted a rather cosy picture of servant life in the late Victorian/Edwardian eras and beyond, but the truth is often much harsher. Many of us today have grandparents and great-grandparents who worked ‘in service’ and not all of them had the kindly Mrs Bridges or the, strict but fair, Mr Hudson to turn to. 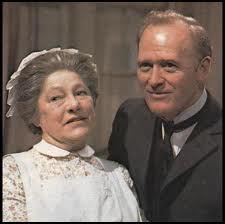 Many will tell tales of drudgery and eighteen hour days, followed by rotten food or upstairs’ leftovers, a hard bed and a freezing cold room to sleep in. Privacy was not an option, with same-sex servants sharing not only a room, but quite often a bed. As for a private life – forget it. ‘No followers’ was a frequent condition of employment and male and female servants slept well apart from each other. 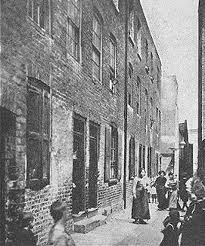 But for many girls and boys from large families, a life in service provided a lucky escape from overcrowding, grinding poverty and a life of crime on the streets. My main character, Becky, is just such an example. Hailing from one filthy room in a cockroach-infested tenement in Hoxton, London, she would rather do anything – even go into that evil room – rather than face going back to her childhood home.

My late maternal grandmother was in service for the local squire and his family, from a tender age (probably thirteen or fourteen at the latest) until she married the coachman in 1909. She told of a strict hierarchy and firm discipline. Below stairs, the butler ruled as King, with the housekeeper as Queen. You did as you were told and never answered back. You knew your place and you kept to it. In return, you ate three good meals a day, had clothes (all right, a uniform) to wear, somewhere to sleep and you were paid for your services (albeit not very well). In the house where my grandmother worked, the squire’s wife was most particular about ensuring the servants were well fed and looked after. Most were grateful for it and worked hard, rewarding their employers with loyalty. Given the conditions, Grandma was luckier than many in service, I know.

Nowadays, our world is vastly different from the one my grandmother inhabited. We would balk at the deferential attitude she and her fellow servants adopted towards their employers. We would sneer at the thought of referring to anyone as our ‘betters’ and we would want to improve our lot in life, rather than be satisfied with our ‘station’.

Are we living in better times as a result? In many important ways, yes, I believe we are. But are we any happier or more fulfilled? In some ways, maybe not. My grandmother said she was perfectly happy with her station in life. She never aspired towards anything else. She never had any money, but she did have a happy marriage and three children she took a pride in raising to have good values and a strong moral compass. As far as she was concerned, she had a happy and fulfilled life.

Isn’t that what we all strive for?

Miss Abigail’s Room is out now. Here’s the blurb:

It wasn’t so much the blood on the floor that Becky minded. It was the way it kept coming back…

As the lowest ranking parlour maid at Stonefleet Hall, Becky gets all the dirtiest jobs. But the one she hates the most is cleaning Miss Abigail’s room. There’s a strange, empty smell to the place, and a feeling that nothing right or Christian resides there in the mistress’s absence. And then there’s the blood, the spot that comes back no matter often Becky scrubs it clean. Becky wishes she had somewhere else to go, but without means or a good recommendation from her household, there is nothing for her outside the only home she’s known for eighteen years. So when a sickening doll made of wax and feathers turns up, Becky’s dreams of freedom and green grass become even more distant. Until the staff members start to die.

A darning needle though the heart of the gruesome doll puts everyone at Stonefleet Hall at odds. The head parlour maid seems like someone else, the butler pretends nothing’s amiss, and everyone thinks Becky’s losing her mind. But when the shambling old lord of the manor looks at her, why does he scream as though he’s seen the hounds of hell?

Available as an ebook from:

You can connect with Cat here:

9 thoughts on “When The Butler’s Word Was Law”