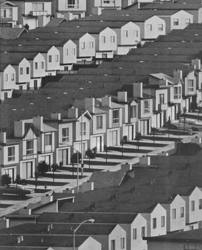 What was that old song (I’m showing my age again) about the sameness of life? Ah yes! Malvina Reynolds, 1962:

And the people in the houses
All went to the university,
Where they were put in boxes
And they came out all the same,
And there’s doctors and lawyers,
And business executives,
And they’re all made out of ticky tacky
And they all look just the same.

(copyright 1962 Schroder Music Company, renewed 1990) You can get the full lyrics here: http://people.wku.edu/charles.smith/MALVINA/mr094.htm#1

What’s an old song got to do with horror? I’m sorry to say, plenty. Cast your mind back to 2011 and a TV series called Marchlands, allegedly a creepy spooky tale that would send cold bicycles down your spine. I approached it positively because I knew one of the actors in it, but disappointment set in all too soon. Not scary, Mr TV commissioning editor. I gave up halfway through the third episode.  Look up Marchlands on IMDb and it says:

“A supernatural drama telling the story of three different families living in the same house in 1968, 1987 and the present day, linked by the spirit of the young daughter of the 1960s family, who drowned in mysterious circumstances.”

Fast forward to present day (well, this back and forth between time zones is all the rage it seems) and the newest ITV chiller, Lightfields. I decided, without bothering to do any research on it, to take a look. Boredom set in almost immediately. At that point I did some digging. IMDb features no synopsis or blurb as yet on this series but old Wikipedia (yes, I know it can be wrong but in this case it appears to be correct) does. Remember that blurb above for Marchlands? Look at this for Lightfields:

“Lightfields is a five-part supernatural drama first shown on ITV in the United Kingdom on 27 February 2013. It is a follow on from the popular ITV drama Marchlands with a similar storyline. Lightfields tells the story of three different families living in the same house at three different time periods, in 1944, 1975 and 2012. The three families are linked by the spirit of a young girl who died in mysterious circumstances in 1944. The first episode has the appearance of a ghost story spanning three different time periods and generations in a single farmhouse in Suffolk.”

Hmm. Sound familiar? Well, let’s compare like for like. Here’s the Wikipedia blurb for Marchlands to save you clicking the link:

Spot the difference? No? I’m not surprised. So, after bringing us a non-scary spooky story in 2011, they bring us yet another serving of the same thing. This is lazy. This is unacceptable.

There are many talented writers being overlooked in order to achieve this. And it’s not, in my view, limited to television.

The entire horror genre is suffering from a lack of imagination at the delivery end (commissioning editors, film producers, tv producers, publishers etc), an uwillingness to give the public something original, daring, different. And I’m pleased to say I’m not alone. Read this superb article by Sarah Dempster in The Guardian:

Lightfields: a supernatural chiller that assumes all its viewers are idiots

Short on scares, surprises and sense, this time–jumping ghostly drama will leave your fingernails well and truly unbitten

Sarah speaks for me. Does she speak for you? Do you crave horror films, programmes and books with a bit more about them, with a challenge, with a scare or two? Leave me a comment.

Don’t eat too much chocolate  – and if you do, make sure it’s dark, very dark. 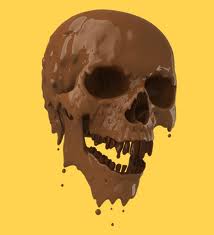