Baron Menuhin of Stoke d’Abernon was born this day in 1916 in New York City. 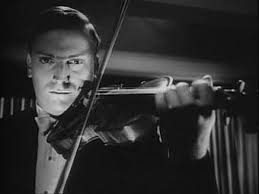 So how did an American boy born to Jewish parents of Belarus origin become a Peer of the Realm and, in my opinion, one of the greatest violinists ever to walk the earth? The short answer is that he was brilliant, a genius.

Menuhin began learning the violin at the age of four under Sigmund Anker and gave his first solo performance at the age of seven with the San Francisco Symphony. I have never been able to find a recording of it but if there is one *waves*.

In 1929, under the baton of Bruno Walter, Menuhin played three concertos by Bach, Brahms and Beethoven. In 1932 he made the famous recording of  Edward Elgar’s Violin Concerto in B minor in London, with the composer himself conducting.

Menuhin’s career is so vast it would be pointless to reiterate it all here. Suffice to say, for the purpose of this dedication, that he played worldwide with the best conductors and musicians of the time, himself forging a distinguished career as a conductor in his own right. Of the classical works, he is perhaps best remembered for his rendition of Mendelssohn’s Violin Concerto.

But he didn’t stop with classical music and famously partnered both Ravi Shankar and Stephane Grapelli. Here he is with Grapelli on Parkinson:

In 1965 Menuhin was made an honorary Knight Commander of the British Empire (KBE) while still a US citizen. This was made a full knighthood when he became British, and finally in 1993 he was created Lord Menuhin, Baron Menuhin of Stoke d’Abernon in the County of Surrey

Long after I became a fan I had the privilege of getting to know his grandson, Max, who is a close friend of my son’s. The likeness is astonishing.