It is so long since I offered a Sunday Sample. So here we are. A little bit from my naughty A-Z of Understanding Italians which, amazingly, has been a bestseller on Amazon.it all month! Hopefully it will raise a titteretto or two. 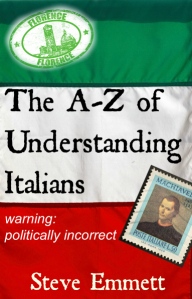 Exclusively from Amazon, and free to borrow through Amazon Prime

D is for Driving. It is often said that Italians are the worst drivers in Europe. I am not absolutely sure about this but I can fully understand the sentiment.  I knew an elderly Athenian, a well-to-do Greek who had travelled the world, who told me once that he would not drive outside Greece because it was unfair to inflict Greek driving on innocent countries. His wife was half Italian so I must presume that he had some experience of her driving. Nevertheless, put an Italian behind the wheel of a car (same applies to a white van or an articulated lorry) and you would be forgiven for thinking that their brains are switched off as the ignition is switched on. Let me give you a few random examples.

You are happily driving along a peaceful country road in perfect conditions, excellent visibility and observing the speed limit. Not a vehicle in front of you, nor behind. Far in the distance you can see from the trail of dust that a vehicle is plying its way along a white road in the general direction of the road you are travelling along. It’s about a kilometre away, you can see because you have just come over the brow of a hill and the white road is in the bottom of an extremely wide valley. You think no more of it and continue your gentle and picturesque descent.  You become aware that the other car, you can now make out that it is a maroon coloured Panda, has reached the end of the white road. It doesn’t move. It just sits there. You assume that the driver has no wish to join the main road as there is more than enough time to get in front of you and if he were going to turn toward you he wouldn’t have to consider your approach at all. You keep half an eye on the Panda now that you are aware of it but there is no movement of any kind as you gradually draw closer and closer. Soon you can make out the driver, a small elderly man in a trilby and dark blue quilted body warmer, despite the outside temperature being thirty-five degrees Celsius. He’s looking towards you intently, hands firmly on top of the steering wheel. Your instinct causes you to brake slightly but he shows no signs of moving in any direction. The distance between you and him is now narrowing and soon you are content that it’s safe to ignore him since he would not now have time to get in front of you. One hundred metres, fifty metres, twenty-five metres, fifteen metres, ten metres. Just as you are almost level with the edge of the white road the Panda leaps forward right into your path and you are forced to swerve in order to miss it. Your nearside wheels hit the verge and at one point seem to be in mid-air while you hang on for dear life and try to guide your car between the roadside kilometre marker and the bonnet of the Panda. You clear the obstacles and stop the car. Trembling you get out, as much to check on the old bugger as anything else, and walk towards his car which is stopped askew in the middle of the road. You see that he is waving his arms about and you are worried that he may be in shock. As you approach he leans out of the window and shouts ‘Arsehole, you want to look where you’re going!’ and drives off.