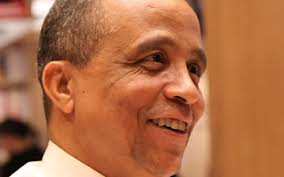 Yasmina Khadra literally means green jasmine and is the pen name of the Algerian author Mohammed Moulessehoul , adopted by him to avoid military censorship – he was at one time an officer in the Algerian army.  His latest work, Cousin K, is a novella and, at 96 pages including the Afterword by Robert Polito, a quick read. Yet in that hour or so Khadra takes the reader on an emotional journey so disturbing, with an ending so shocking, that the only option is to go back to the beginning and start it again.

The opening line makes it impossible not to want to find out what this little book is all about:

“For some people nothing turns out right.”

Is the narrator cursed in some way, one of those people whom good fortune always manages to avoid? Certainly there will be many readers who empathise with hating school, being the youngest of three children and the one seemingly left out. The name of the narrator is never given, but that is more than made up for in the dark secrets that are skilfully and dramatically revealed as the end draws near. There are eloquent and sensuous descriptions that almost trick the reader, rather like a car passenger enjoying the scenery but with a nagging worry about where they are being led. Almost at the end, Khadra provides just enough to allow the reader to worry, then delivers the shocking confirmation.

What makes Cousin K stand out from the crowd is not the story itself but the story combined with exquisite writing. Almost every sentence is worth framing, and quite clearly the translators are to be congratulated, too. Consider this introduction to the village where the story is set:

“From my watchtower, suspended between lyricism of memory and the decay that goes with absence, I stare tirelessly at the chaotic village at the bottom of the hill. I try to trap the secrets behind the closed doors, to thwart the plots hatched amidst the twisting lanes; impossible, I can’t do it. I imagine, one by one, the little people nibbling away at their slice of existence, harbouring few illusions, bundling up their dashed hopes, consigning them to the junk room of disappointment; I feel no compassion.”

And no reader can fail to feel the sense of loss and despair when the elder brother to whom the narrator is very close departs after a brief visit to the family home:

“A restless swallow, my brother left at dawn, taking his springtime with him. I can still hear the voices, the laughter, visualize the bright swaths of daylight, the figures like wisps of mist – a whole fairy tale detaching itself from the walls of the manor and abandoning the place as though inhaled by the fast-disappearing car. The grandest of dreams lasts no longer than a sigh; the slightest thing transforms it into a pipe dream. As the rumble of the engine faded, the landscape itself became barren.”

It may be a small book but it is a giant of a literary work. The good thing about the size is that it fits into a pocket or purse with ease, enabling the reader to keep it at hand and dip into a magical world of the flawed and broken heart at every opportunity.

This review was written for The New York Journal of Books.

I was recently tagged by Catherine Cavendish to participate in The Next Big Thing, where authors answer ten questions about their current works in progress. If you haven’t read Cat’s post about what she’s working on now, jump over to her blog to take a look. I love her stories: http://www.catherinecavendish.com/2012/11/the-second-wife-is-my-next-big-thing.html

In turn, I tagged dark fiction writer extraordinaire, Julia Kavan. Julia’s post will go up on her blog on 12th December, so be sure to go over and read it: http://www.juliakavan.com/

So thanks, Cat, for asking me what I’m up to with my writing. Here it is:

What is the working title of your book?

I Love You To Bits

Where did the idea come from for the book?

Like all ideas, from my head 😉 I kid you not. I don’t want to risk being sectioned or labelled as a psychopath, but…every day and week and month that goes by I fall more in love with my partner. Sometimes it hurts and makes me realise how close pain and pleasure are, that a very fine line separates them. The book explores seeking the ultimate act of love to achieve the most intense feelings possible.

What genre does your book fall under?

Horror. Of the psychological kind. (Maybe that should be unkind?)

Which actors would you choose to play your characters in a movie rendition?

I’m afraid  my top choices are all dead: James Mason, Vincent Price and Donald Pleasence. If that rules them out and I have to choose from the living…Sam Worthington, Christian Bale and Javier Bardem.

What is the one-sentence synopsis of your book?

Will your book be self-published or represented by an agency?

That’s an odd question because it presumes there are only those two options – and that’s not true. Just because an author doesn’t have an agent doesn’t mean his/her books have to be self-published. Many authors are published by legitimate publishers without having an agent. I am one of those authors. I’ll be honest, I would like to have a good agent and am always on the look for someone who likes my work enough to want to work with me, but if I can’t find that partner then I will continue to work with publishers directly. I have no plans to self-publish the book.

How long did it take you to write the first draft of your manuscript?

I’ll let you know when it’s finished. A novel in general takes me about a year; I don’t believe a novel of any real value can be rushed out in a few days and am always astonished when I see writers claiming they have done so.

What other books would you compare this story to within your genre?

None. I’m sure there is one but I haven’t found it yet. If anyone knows, please tell me so I can look it up.

Who or What inspired you to write this book?

My partner of fifteen years.

What else about your book might pique the reader’s interest?

Anyone fed up with ‘horror lite’ should enjoy the challenge and the pushing of the boundaries of acceptability. The human mind can be far more worrying than any monster.

I don’t write poetry. The last was when I was about 10 years old and I won a book token. I don’t remember anything about the poem or the book I chose. But last night I had an email suggesting I might like to write horror poetry. Hmm. Not sure it’s for me really. I mean, I don’t love poetry the way I love prose. Still, my last post about the wonderful Mary Beard made me think of this (I told you she’s inspiring):

Mary Beard
was afeared
digging in the vault.
A corpse jumped out,
began to shout,
said Mary, ‘snot my fault.
***
What do you think? Go on, you know you want to 🙂